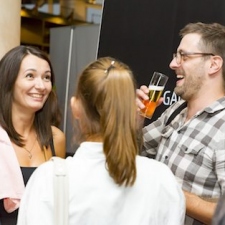 It was a sell-out party to celebrate Gamescom in Cologne, Germany, with more than 320 games industry professionals gathering to hear an expert panel and party into the night at Steel Media and G-STAR’s first joint mixer.

And that’s just the start for this global partnership, with preparations already underway for further upcoming international events, with developers invited to sign up for November's Big Indie Pitch at G-STAR in South Korea.

The Big Indie Pitch is a competition for small, independent mobile games developers. It invites them to show their work-in-progress projects – including VR and AR - to a panel of judges. The experts include press, publishers, experienced developers and industry insiders, providing valuable feedback and prizes for the best games.

The Big Indie Pitch has visited many cities around the world, but November will see it take place in South Korea for the first time, alongside the awesome G-STAR festival.

G-STAR and Steel Media, publisher of TheVirtualReport.biz and the Pocket Gamer brand, announced their partnership in August. The media partnership sees the two companies support and promote each other, with a view to growing their respective audiences around the world.

The first joint event was a party and discussion panel on Tuesday 22nd August, from 7pm at the Hyatt Regency Cologne Hotel, Cologne. Registrations for the event sold out in advance and more than 320 people attended. It was a fantastic mixer event for the games industry, which began with an ‘East Meets West Masterclass’ panel onstage.

Don’t Miss The Next Events!

The next collaboration will be Steel Media's XR Connects Helsinki event on the 19th and 20th September, where G-STAR is a major sponsor.

Then the two companies will prepare for the G-STAR event itself, in Busan, South Korea. The annual computer and video game trade show is a one-stop, easily-accessible gateway to the Asian market. South Korea is one of the most robust and exciting gaming markets in the world and G-STAR is the best way for Western games companies to experience it.

This year’s G-STAR takes place 16th-19th November (B2B 16th-18th November) at BEXCO, Busan, South Korea. It features conference tracks, a games industry job fair, exhibition areas including zones for each platform - including mobile and PC - an esports event, and more. This year, it will host one of Steel Media's Big Indie Pitch sessions for the first time.

You can sign up for G-STAR tickets here, or you can register a project for the Big Indie Pitch at G-STAR here.

Chris James, CEO at Steel Media said, "We welcomed 328 people into our mixer and panel in Cologne last week, which was a fantastic turnout for an industry get-together. Thanks to everybody who came along and supported us. You can see from the photos on our Facebook page that the panel was well attended and the party was packed. It was wonderful to be able to celebrate our collaboration, and enjoy the Gamescom vibe, together. And now we're preparing for two further international events! PG Connects is just around the corner, and then registrations already open for G-STAR and our first Big Indie Pitch in South Korea in November."