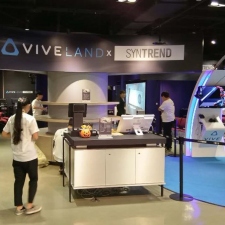 The business model is like that of a VR arcade; visitors are charged a time-based fee to experience a range of the most popular Vive VR content as well as four themed zones with games like Project Cars, Front Defense and The Walk VR. VIVELAND also has its own green-screen mixed reality zone where customers can watch other players in their VR experiences and save their own play session video.