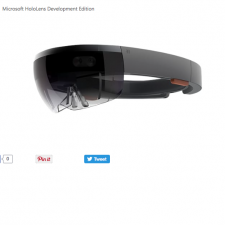 Pre-orders are restricted to developers and industry, so private consumers need not apply - even if you can afford them!

The Microsoft HoloLens Development Edition costs £2,719 (€3,299) and Microsoft explicitly states that it's for developers only. Purchasers may not resell the hardware and it comes with no warranty.

The Microsoft HoloLens Commercial Suite costs £4,529 (€5,489), with Microsoft restricting usage to developers and enterprise purposes only. Again, purchasers may not resell the hardware, which comes with a limited warranty. This edition is listed as 'Out of stock' at the time of this article.

You can now pre-order your headset at the Microsoft Store.