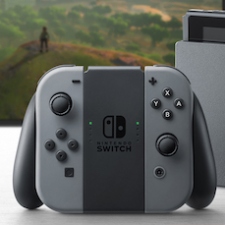 Tatsumi Kimishima, president of Nintendo Co, has said of VR that, “We have a lot of interest.” He also revealed that, “[Shigeru] Miyamoto has talked about this several times.” So it seems senior management at Nintendo is considering working in VR, including the creator of Mario and industry influencer, Miyamoto-San.

In an interview with Bloomberg, Kimishima observed, “VR offers the experience of playing in a new way. But that depends on the software and how you use it to play. Especially when it comes to games. And beyond games, it also applies to other non-game things, so it is something to look forward to.”

The tech site also asked directly about the possibility of VR for the Japanese games firm’s forthcoming Switch console. Kimishima replied, “If you asked as if this might be possible in the future, certainly we can't say no. In terms of how it can be used for gaming, it's something we must consider. It depends on the system specifications. I can't say that we have no interest in VR because VR offers new ways of playing, but that depends on what kind of software can be played. But what kind of software works, that's only something you only know once you actually experience it. And our games are ones that are usually played for a long time.”

While that’s far from a commitment to VR, the fact that Nintendo is considering the format could have a huge impact on the industry. It’s well known that their fanbase will buy hardware solely to access first party titles and the prospect of Mario in VR could be the persuader that encourages the mass market to adopt VR.

Nintendo IS Working On VR For Switch

For Your Consideration: VR Roundup