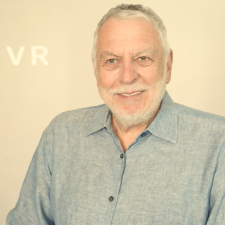 You’ve probably heard of Nolan Bushnell. You know; the guy that founded arcade legends, Atari? He might be 73 years old, but the guy still has his finger on the pulse of cutting edge gaming technology. We had the pleasure of meeting the charismatic American a few years ago and made a point of watching out for the old dog since. Turns out he isn’t done with gaming by a long chalk...

Today, Bushnell has resurfaced with a brand new Virtual Reality company that offers a premium out of home experience that’s probably beyond the wallets of just about any consumer, with Modal VR. They describe it as an industrial-grade VR platform for enterprise. It’s a portable VR system for enterprise that sets up in minutes to offer a wireless, full-body VR experience for multiple users at once. Modal VR promises extremely fast and accurate tracking in very large areas of up to 900,00 sq ft.

The idea is that a business operator could turn up to any large space – say, a football field or warehouse – with either a Windows or Mac set-up and offer wireless multiplayer VR experiences. They demo this with a two-player ranged combat game called Mythic Combat that sees two combatants trade shots from distant rooftops.

Bushnell, Co-founder and Chairman at Modal VR clearly believes in VR's potential to replace cinema as a recreational pastime, saying that, “We buy a ticket, sit in a movie and watch somebody else’s world. Shortly, we’re going to be able to buy a ticket and enter a world. People used to sit and just look at pictures on a screen? How silly is that?”

The other half behind Modal VR is Jason Crawford, Inventor, Founder and Interim CEO. He’s helped shape new ideas and initiatives for Samsung, Hasbro, Nickelodeon, Atari and Walt Disney Imagineering over the last 15 years. As well as, “Working with arcade vendors and family fun centres to create games and experiences that immerse and entertain their guests like never before,” Crawford also sees the system’s potential for previsualisation in Hollywood and broadcast saying, “We’re working with film and television studios giving directors, producers, actors and visual effects supervisors an entirely new way to collaborate and visualise during production.”

If all that business talk is too dull to spark your imagination, Bushnell promises his system will deliver what we’ve been looking since Star Trek: The Next Generation first showed us its Holodeck in 1987. “The Holodeck has always been gold-standard. Modal VR is the very first time that I believe we have the Holodeck.”

We think that Oculus and HTC’s HMDs are so impressive that you’d have to go a long way to better them with today’s technology, but if Bushnell and Crawford can truly deliver a premium experience that outguns domestic systems, then we’re all for it.