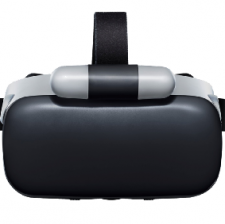 HTC Nippon’s President and Representative Director, Masakatsu Kojima, has announced the company's new VR headset – and it isn’t a Vive model. Kojima claims that the new Link, ‘Is the only mobile VR terminal in the world that can enjoy the ability to move around in VR space (6 DoF) and connect with smartphones’.

The Japan-only headset connects to HTC’s flagship phone, the U11, via USB-C but unlike other smartphone based VR headsets, does not use the handset’s screen as a display. Instead, the Link itself has two 3.6 inch 1080 x 1200 LCD panels with a 90Hz refresh rate and a 110 degree field of view. The Link doesn’t use Vive base stations, but is bundled with a stereoscopic camera for tracking, as well as two 6DoF controllers. Four AA batteries are also included, presumably to power the onboard display.

Enjoy It For A Long Time

Kojima said, “By installing a high-performance CPU and VR lens, it became possible to instantaneously synchronise the movement of the body of the VR viewing screen with the body. By reducing the discrepancy between the VR screen and the vision of the customer, it makes it easier to watch and experience, and you can enjoy it for a long time.”

HTC will sell the Link as an accessory through carriers and no price has been announced. VR content will be available ‘Sequentially in line with the abundant lineup that we have cultivated in Vive". We’re guessing through Viveport, then.