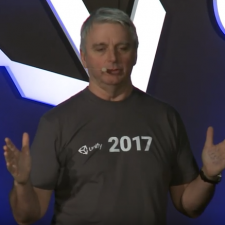 Unity CEO John Riccitiello took to the stage at GDC - along with CTO Joachim Ante, Technical Director Lucas Meijer, and Founder David Helgason, along with key staff and partners – to share their plans for the popular engine.

The next update, Unity 5.6, will be released on 31st March and will also be the final update under the Unity 5 name. Of most interest to VR developers is the news that the 5.6 update supports Google Daydream, as well as Cardboard on both Android and iOS.

Unity 5's replacement, Unity 2017, will enter Beta in April.We’re promised that Unity will continue its commitment to improve key areas like graphics, stability, efficiency, and platform growth for Unity’s growing audience of creators, artists, and animators.

The Unity Labs team is also working with partners like Oculus, HTC Vive, PlayStation VR, and Daydream to bring you the XR Foundation Toolkit, a framework for XR developers and artists to get up-to-speed as quickly as possible creating immersive experiences. You can find out more about OpenXR in our recent report.

EditorVR has been downloaded more than 6,000 times since its Alpha in December. Unity is now running a competition to find the best EditorVR tool. There’s a cash prize and the winner will be chosen and showcased at Vision Summit 2017.

Unity chose the GDC stage to announce its first Artist In Residence position. You can submit your application here.