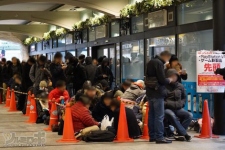 Hundreds of Japanese consumers queued overnight for the chance to buy PS VR as new stocks were released to retail yesterday. And when we say ‘chance’, we mean it; not everyone in the queue went home with new hardware. Retail outlet Bic Shinjyuku referred to the event as a ‘lottery’, where a winning ticket simply entitles the winners to buy one PS VR by 4pm the same day.

The high demand is due to the fact that PS VR has been out of stock since it sold out fast after its launch in October.