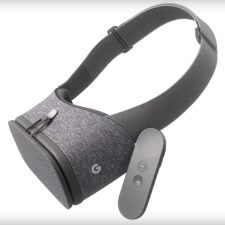 It might be easy to think that VR was lost in the middle of today’s Google conference, in-between the official unveiling of a new phone and home hardware, but that actually puts it at the heart of Google’s strategy. At the event, Google showed, ‘The first phone made by Google inside and out’, the Pixel smartphone - also the first phone to be Daydream VR ready. It will be available in 5” and 5.5” display sizes from $649 and you can pre-order from today in most territories, or 13th October in India. Daydream VR will also work with handsets from other manufacturers.

Clay Bavor, VR team lead, said that, “We love VR. It’s not just a technology, but unlike anything else we’ve seen it can put you somewhere else. It will impact how we explore, play and learn.” Google aims to make VR technology friendly and more accessible by tying together software, hardware specs and apps through a combination of phone, headset and controller.

Google is keen to pitch their new Daydream VR as a complementary blend of hardware, software and... clothing?! When they showed the headset, Bavor said that they, “Saw issues with comfort and everything just looked the same. We have a bit of a different take on the headset.” Where most VR headsets are made of rigid plastic, Daydream is fabric. Bavor said that, “It wasn’t inspired by gadgets, but we looked at what people wear.” It’s made of, “Soft microfiber and other materials that you would find in clothing. It’s soft and cosy and feels great to wear.” He also promised the Daydream headset is 30% lighter than similar devices and fits nicely over eyeglasses.

They were light on specifics, but Google’s presentation said that Daydream has a good field of view, low latency and accurate headtracking, as well as being comfortable and easy to use. The headset will first be available in a ‘Slate’ colour, soon to be followed by ‘Snow’ and ‘Crimson’.

After the new Pixel phone and Daydream headset, Google also unveiled the final part in its trio of VR hardware, with its controller. It features a clickable touchpad, a couple of buttons and movement sensors that enable users to point, swing and aim. They’re promising control, “So precise you can draw with it.” And in a consumer friendly touch, you can even store the controller in the headset itself so you don’t lose it between sessions.

Adrian McCallister, Director of VR partnerships, took to the stage to show us the kind of immersive experiences that we can expect from Daydream. First up was the announcement of an exclusive return to the world of Harry Potter with J.K. Rowling’s Fantastic Beasts And Where To Find Them with Warner Bros. They also showed astronomy app Star Chart, and the sci-fi game Gunjack from CCP.

McCallister also revealed that Netflix, HBO and Hulu will bring their entire libraries to VR. She told us that, “Over 50 partners are bringing apps and games to Daydream before the end of the year and there are hundreds more on the way.” Daydream will also feature Google Play Movies, Photos, Streetview and YouTube.

When And How Much?

You won’t have long to wait for the Google Daydream experience – it’s available next month (November 2016) for $79 including both headset and controller. As Google was proud to observe, they want to make, “VR accessible to everyone.”

You can read more about the Pixel phone on our sister site, PocketGamer.co.uk:

5 reasons why the Google Pixel phone will succeed

5 reasons why the Google Pixel phone will fail