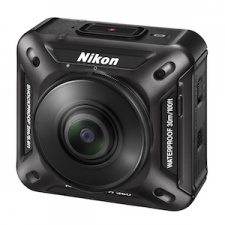 Lauded Japanese camera company Nikon has announced a new range of action cameras to be released next month. Of note to us here at The Virtual Report is the KeyMission 360, which will capture and share fully immersive 360° interactive videos and photos via smartphone pairing and WiFi. It will record 4K Ultra HD videos, and 23.9 megapixel photos, as well as time-lapse sequences and is built to withstand punishment, as Nikon claims their new camera is waterproof, shockproof and freezeproof.

The KeyMission 360 will be released next month and is available to pre-order now at £419.